I used one of the very nice Pig Iron Systems Troopers to test a scheme for another range of miniatures. I like the way it works on these minis so may do a few more...

...build-up. Mark (Dreamforge) has communicated an issue with the arms being incorrectly paired on the sprues and has gone to a great deal of trouble to correct this informing his customers and very quickly organising some replacement parts. I couldn't wait though and I've never yet built a 28mm miniature with seperate parts that didn't have minor (and major) fit problems (could have a lot to do with my inherent impatience too!). Quite prepared to do a little (or a lot) of filling and sculpting with putty I was presently surprised by the lack of problems. I drilled and pinned the right arm with the weapon and tried the three left arm options finding that the left arm from the sub-machine gun set fitted perfectly! I used that one (putty standing by....). As I like the added strength of drilling/pinning all joins (apart from the left arm) were fixed with this method. To get an accurate fit for the torso and legs I drilled through the neck and right throught the torso and then, holding the two parts firmly into position, drilled slightly into the hips to mark where the hole should be. Sepearating the two parts I then completed the drilling of the hips. I then superglued the shoulder pads. The head is not fixed permanantly as I intend to paint this seperately. 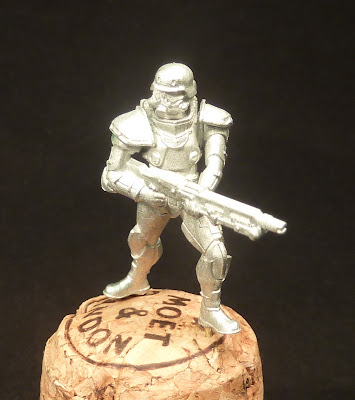 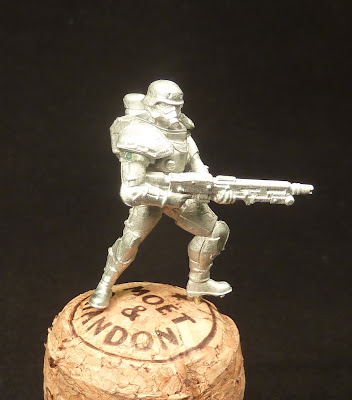 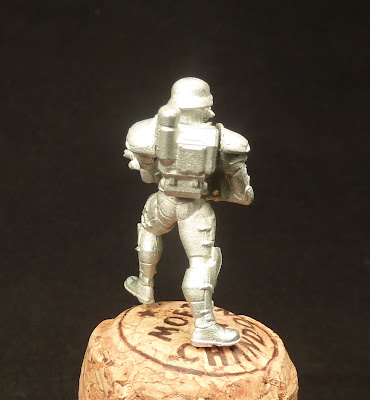 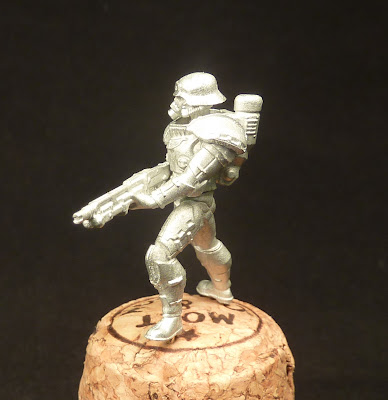 There will be command packs for the Sturmtruppen and the Kriegsmarine and they will include a couple of heads wearing caps. I added a couple of Warlord plastic WWII German heads to see how they looked... 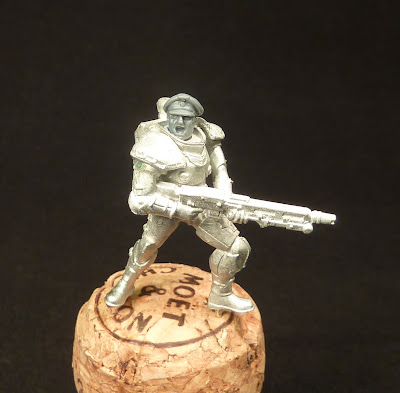 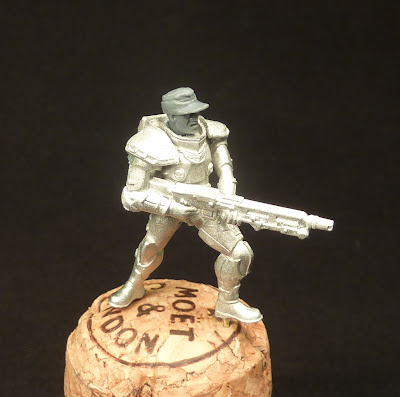 Style and design are a matter of taste and I'm sure the 'German' influence won't be to everybody's taste but, believe me, the quality of the sculpts and the flawless castings (I haven't done any cleaning-up of this figure) are first class and as good as anything I've seen in any scale. Go to Mark's blog and check out his plans for the future (and Bulldog's rendition of the Leviathan on the forum - absolutely stunning).
Posted by dwartist at 23:29 No comments:

...build-up. Putting the first suit together proved to be pretty painless.The hips and legs have a male/female join via a pin and socket and allow a little variation in the placement of the legs. I did drill out the socket on the legs a little so that the gap would be smaller (I liked the idea of it being a worn suit rather than a 'robot'). To achieve this 'look' successfully you would probabley have to add covers to the shoulder/arm joint......Anyway I drilled and pinned the arms to the shoulders (the right is not fixed as I want to remove it for ease of painting - head and headguard too) and the torso to the hips to strengthen these joins and then glued the upper arm-guards. I then added the hands (the right has the weapon attached) after drilling and pinning.Very simple build and it looks great! 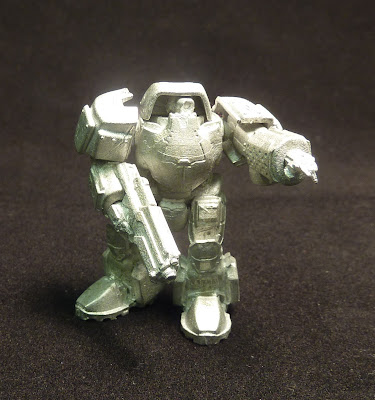 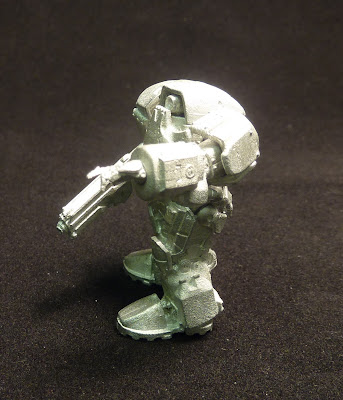 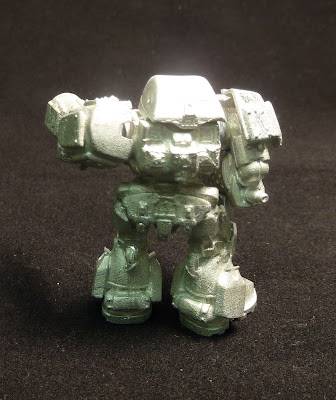 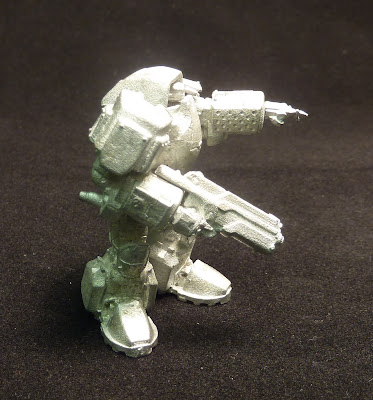 I also took some comparison pics... 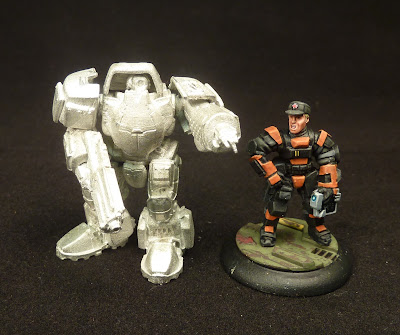 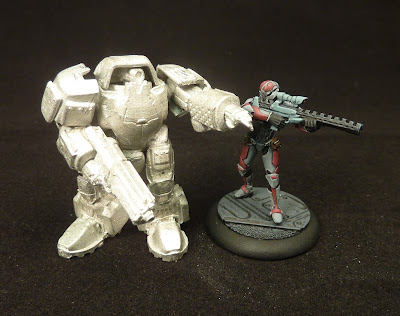 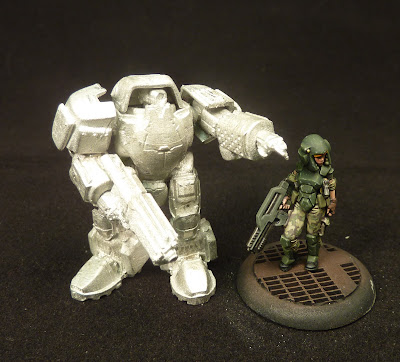 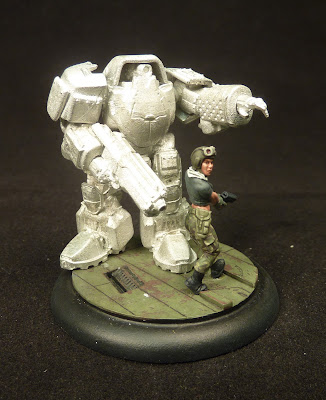 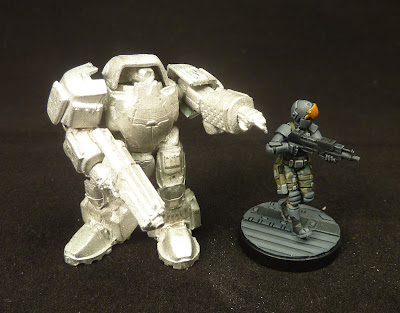 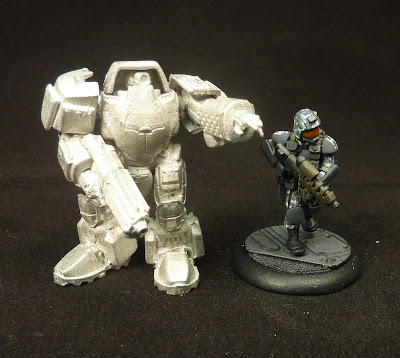 and a couple just for Steve... 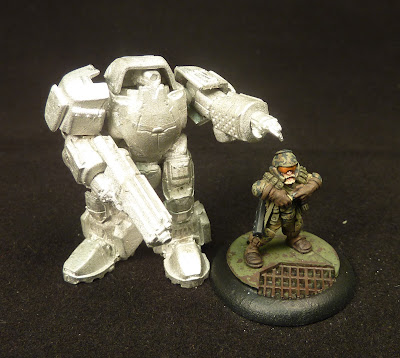 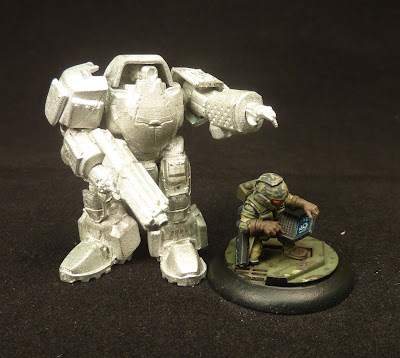 ﻿As you can see - universally ubiquitous! I'm really looking forward to getting paint on these (when I decide upon a scheme) but I don't know when that will be.....
Posted by dwartist at 22:38 No comments: 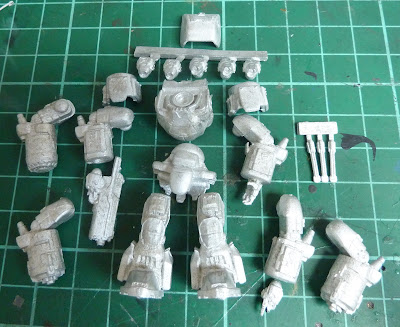 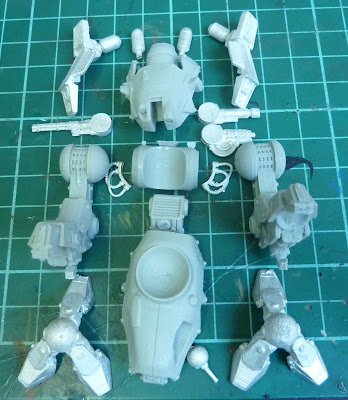 Again, WIP to follow.
I haven't got time to show you the other very nice miniatures I ordered from Micropanzer but will report on them next week.
Posted by dwartist at 21:00 5 comments:

...from Dreamforge Games by Mark Mondragon. I first became aware of these some time ago and subscribed to the 'Kickstarter' campaign that Mark instigated to raise funds for this particular project - and boy was that a great move! These are excellent and my only regret is I didn't commit to buy the Kriegsmarine too. Conceptually future German troopers, these are wonderfully designed and detailed multi-part miniatures that have been created using 3D computer programming and expertly cast (no casting faults whatsoever and only hairline mould lines to clean up) in white metal. In the pack there are enough bits to make ten troopers
ten sets of standing legs (two of each of five different sets) and an additional kneeling set 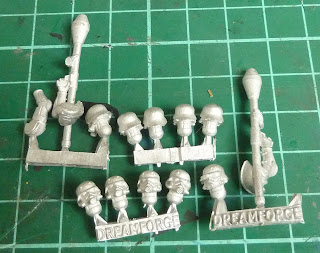 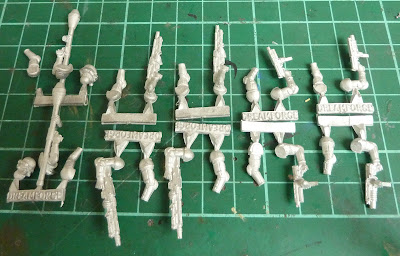 here's a closer look at the components 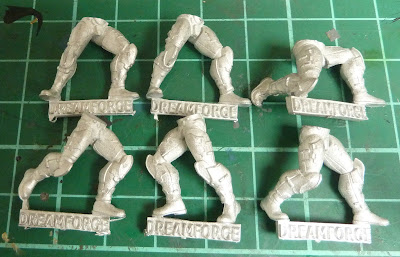 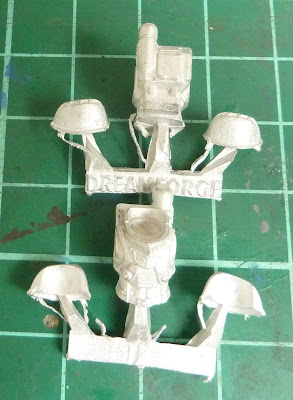 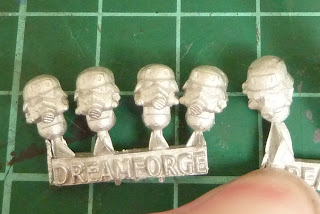 I think it's pretty clear where the inspiration comes from (the weapons and helmets are very reminiscent of WWII German equipment) but these are clearly sci-fi interpretations and as such appear to be wearing clip-on armour over an 'undersuit' (like Antenociti's GOT troopers). They'll look great with Secret Weapon's 6x6 (which also has marked similarities, particularly on the turret, to WWII German armour) and I'll paint the second one I'm building to fit with these very delightful miniatures.
I'm hoping I can fit a build/paint of a couple of these figures into what is, at the moment, a very busy painting schedule so watch out for a WIP and some comparison pics.
Posted by dwartist at 17:58 No comments: 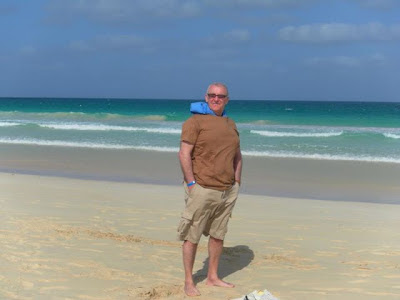 ...and suddenly it's not! Been a way from the 'painting desk' for a week getting a bit of sun (one of the Cape Verde islands, Boa Vista - wonderful but bloody windy!) and finding a couple of parcels waiting for me on my return. Some great stuff from Dreamforge Games and Micropanzer which I'll photograph and review (expect a few superlatives!) later and tomorrow.
Posted by dwartist at 15:08 No comments:

...painted but the photos haven't come out that well. The vest has been painted to appear quite sheer in certain parts (?) but the light 'bounced' back off the white.

Secret Weapon Miniatures brass-etch Panniers, rather than continue with the 'rack' I was scratchbuilding.
Eight Panniers (2x large, 2x small and 4x medium) and a lot of detailing bits! You'll be seeing these on all sorts of vehicles I think. Anyway here's the two large panniers on the 6x6...

Amongst the 'bits' where two circular grills that fit the new exhaust outlets perfectly (panniers and bits could have been designed just for the 6x6 as the fit is so good!). Mr Justin from SWM claims the panniers  are very easy to use and even includes a video on the website to show you how to bend them to shape claiming that you don't even need a 'bending-tool'. Well I started using such a tool but ended up bending them as he instructed - and, yes, it's easy! Even if they're not perfect you can always claim the imperfection as 'battle-damage'!
It's also very pleasing to see a manufacturer responding to a customers observations....

both sets of wheels have had the 'mould-slippage' issue corrected and are as near as perfect as you're likely to get with resin castings. I also raised an issue regarding the packaging and this too has been improved immensely - stout box as before but now the items were packed very securely in foam chips.
Bloody marvelous, Secret Weapon Miniatures!!
Posted by dwartist at 17:55 2 comments:

Coming soon to a blog near you....

... Antenociti's NRF Viper Scout ! Pics are of the WIP but should be available before too long. Review and paint up here soon....
Posted by dwartist at 13:25 No comments:

...vignette with a Pig Iron System Trooper (with a head-swap) and a Fenris Base. Base needs a little more work and I'll pile some crates and 'stuff' in the rear corner and maybe add another trooper...