...with a new 'abandoned airfield' base. I will be adding more figures and equipment at a later date. 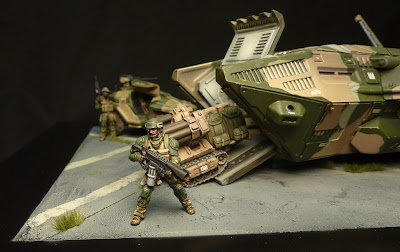 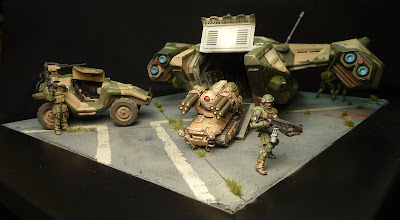 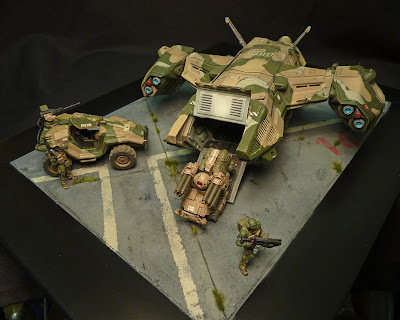 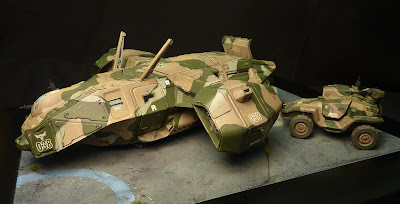 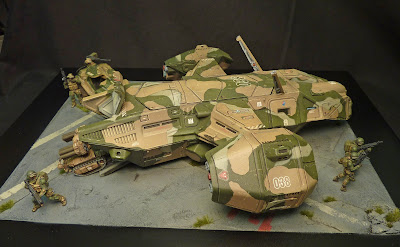 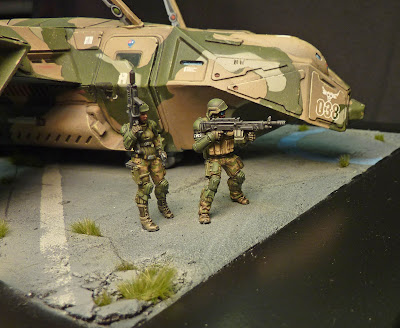 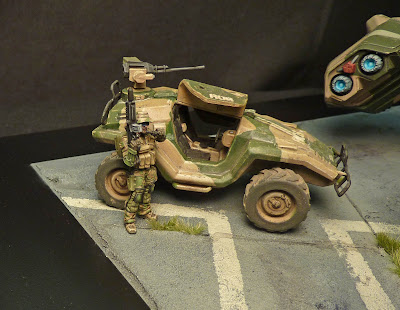 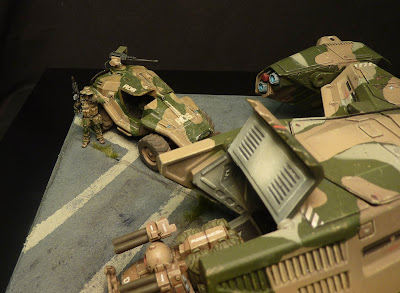 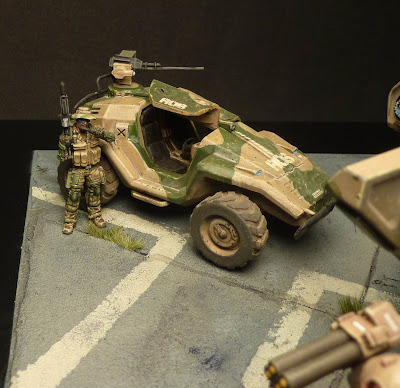 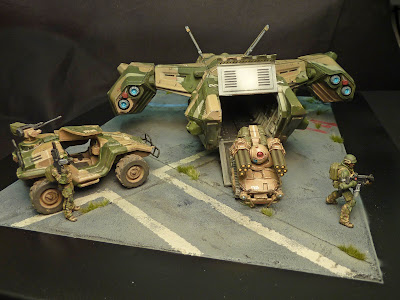 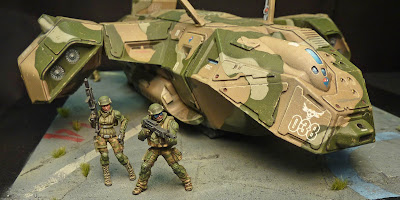 ...it's been a while since I last picked these up (end of July would you believe?) but I suddenly had the urge yesterday to at least finish numbers two and three of the squad of six. I'm also thinking of re-purposing Industria Mechanika's 1/35 'Walrus' as an APC for the squad. 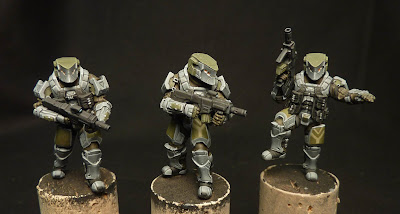 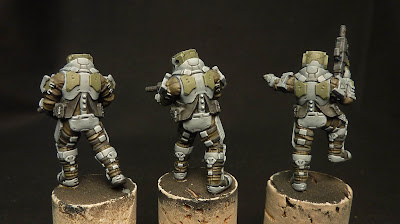 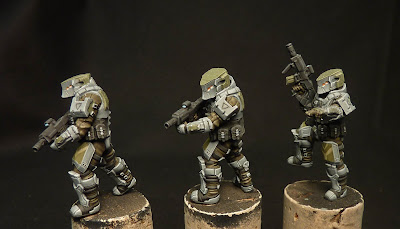 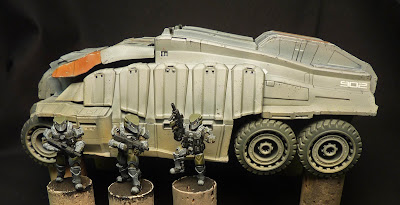 Posted by dwartist at 18:39 No comments:

...painting the interior. I've added a few 'gubbins' to fill the empty walls at the front of the hold and covered the holes in the floor with strips of Antenociti's etched brass sci-fi decking. I haven't over-worried about the detail in the hold as it will only be visible through the ramp opening. Although designed to have the hull roof attached by magnets the resulting gaps are to big for me so I will glue the roof onto the hull and leave the ramp in the down position (missed a trick here SG - I'm surprised you only offer the option of having the ramp open or closed). Added some decals and now the two halves are almost ready to be joined. 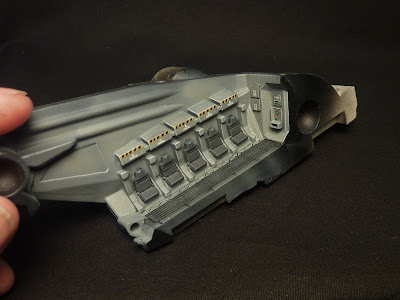 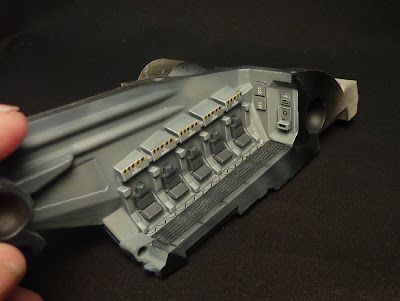 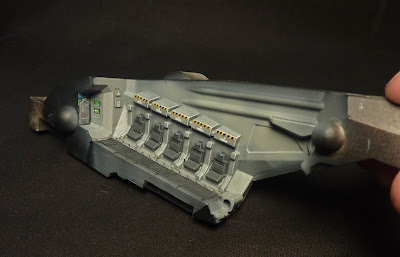 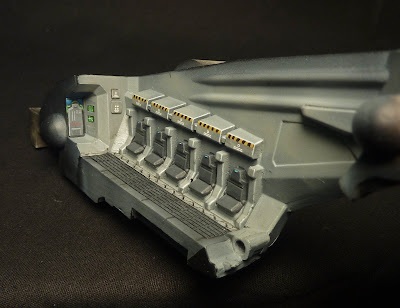 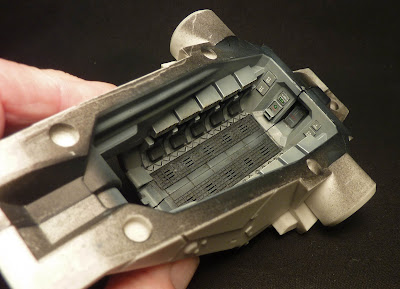 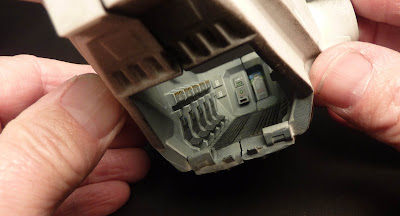 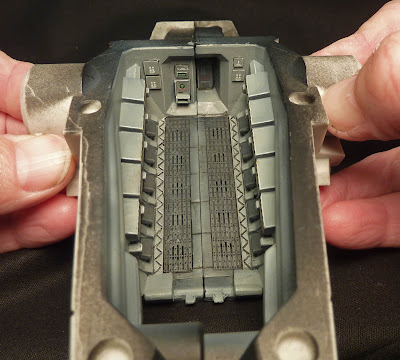 ...yep...a Spartan Games 15mm Halo Ground War 'Pelican' Dropship...it's BIG and it's beautiful! I don't have many photos to show you as yet because it's difficult to handle due to the size and weight of the major hull parts - the hull/cargo hold is cast in two parts and the upper hull/cockpit/tail is cast in three. The cargo area has a fair amount of detail - seats (the game's Pelican seats lean forward slightly and this has been replicated on the model) and floor - and would need painting before joining the two halves together and adding the upper hull parts. Unusually (I think) the floor of the cargo area has ten holes for magnets *edit - the holes appear to be for the round stubs cast onto the feet of the troopers that would normally be used for attaching to their bases - so you can position troops inside if required but I'll either fill or cover them (I'd like to add a little more detail in this area too). In fact there are a number of locations you can add magnets (eg. the hull roof could be removed to show off the interior, the engine pods made to swivel, the undercarriage swapped from landed to flight mode) but  I haven't had time to test the feasibility of using magnets as yet. There are several options and optional parts you can choose - cargo doors up or down; in flight or landed mode (two, large separate perspex bases, one for each option are included); rotating engine pods. The model also comes with a really nice little model of the Warthog and crew (which can be slung under the tail) and twelve UNSC troopers.
More photos, including a few scale shots (it is BIG - as big as some of the 28mm dropships I've been building recently) to follow. The photos below show the main hull parts dry-fitted (the tail has dropped down), the cockpit/upper hull and the interior. 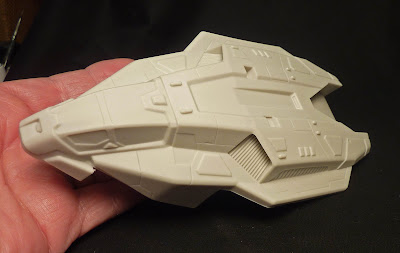 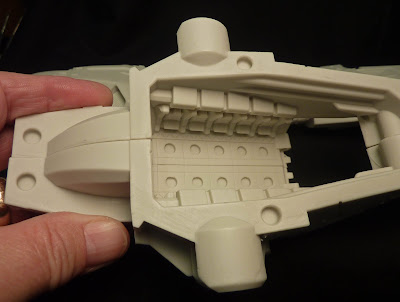