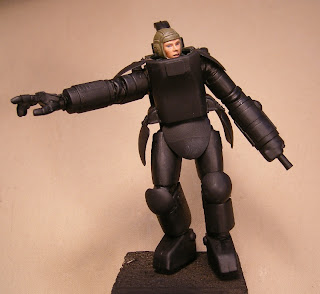 A little more Ma.k before returning to commission work...
This one a Wave AFS1 with Brickworks head swap. Slight conversion to the right hand to create pointing gesture and the joints have been replaced with putty. I wanted to show the figure without the helmet so I've added some padding and controls in the otherwise bare 'cockpit'. She isn't leaning to the left by the way - that's just the way she's mounted on the handling block. Larger image and a close-up of the face and internal detail.
I had a look at how two of my favourite Ma.K painters, BK and Linc, had finished the suit for inspiration and realised that besides needing to add (which I knew about) the power cables from leg to hip I had missed some cabling on the arms and lower legs/feet so I've since added them.
Posted by dwartist at 13:19 3 comments:

I don't paint anything bigger than 30mm - usually...but the armoured-suit models of the Machinen Krieger universe (formally SF3D) have always had an appeal for me. Designed originally in 1/20 scale by Japanese master modeller, Kow Yokoyama, and released by Nitto as multi-media kits they became very difficult to find post 1980's. Recently there has been a revivel of the franchise, overseen by Kow himself and driven by a very large fan base - non more so than the excellent group of modellers and painters who frequent the forum at machinenkrueger.com.
I have most of the new kits produced by Wave in the last couple of years, and by Hasegawa this year but the first one I've started to paint is a 'one-off' from the cottage industry surrounding MA.K, a Heavy Use Worker Suit. Wonderfully designed and cast (? )by Jason Eaton this might best be described as a MA.K version of the Power Loader in Aliens. I've changed the original head (nothing wrong with it but it was wearing sunglasses and I envision placing the HUWS in a winter scene with the Falke and the new, Cold District Maintenance Soldiers figure set), added depth to the 'boots' and attemted to add cast texture to some of the suit.
A larger, close-up is here.
Posted by dwartist at 10:21 1 comment:

...of the team is a Rackham AT-43 UNA TacArm, LT. Epstone who arrives pre-painted with the UNA camo scheme ready for game playing. The figure in the suit (Lt. Epstone) is smaller in scale than the regular troopers in the UNA range, nearer 25mm than 28/30mm, but is just right for Hasslefree's 25mm 'marines'. I repainted, directly over the pre-paint finish, with the same colours used for the 'marines' camo (see the WIP in the KJ post) but the camo patches were painted slightly bigger and after highlighting the centre of the patches (leaving a darker edge) the edges of the armour were highlighted in several lighter layers, chips and scratches were added and a brown filter was brushed on to 'dirty' the camo and make it look well used.
Here are some other views of the finished figure; front; left side; back and with Debra ; McKenzie ; Kendra and KJ.
I'm not sure about Lt. Epstone - boobs are a little too cartoony so may replace her in team with this when finished. I've hollowed anothe Epstone suit, added the padding (painted as well worn leather) added a couple of accessories to the suit (pulse rifle, ammo pouches, bedroll etc) and will arm the suit with Hasslefree SMG from their accessory range.
Posted by dwartist at 13:30 No comments:

A WIP can be found here on Steve Dean's Painting Forum.
Posted by dwartist at 17:29 1 comment:

You may have realised very quickly that my photography skills are, to say the least, underdeveloped (pun fully intended!). This mini is quite well painted but I'm struggling to reflect that in the images I take with my digital camera regarding light and dark contrast particularly in the flesh tones. I'm sure it has alot to do with my lighting set-up. This photograph was taken in daylight.
Again, the camo is the same, but for the first time I've tried to depict the way the clothing (trousers) is made up from seperate pieces of the same cloth by suggesting seams.
More pics here and from the here.
Although there were problems with the photography, Kendra was quite well received when first posted and comments about the camo led me to record the stages of painting KJ
Posted by dwartist at 14:33 No comments:

Although sculpted with different body armour, helmet and clothing McKenzie sits well with Debra - I have tried to emphasise this by painting the same camo scheme as Debra's BDU's on the body armour and helmet cover. I have also tried to paint the armour to suggest cloth covering by painting in creases and folds, best exemplified by the groin armour in this pic.
More pics of debra and McKenzie here, here and with Kendra.
Posted by dwartist at 14:12 No comments:

Hasslefree Miniatures' Kev White has sculpted some really nice sci-fi humans for the Adventurers Range. Debra was released some time ago but I've only recently got around to painting her. She's the first first of several 'marines' I painted in this scheme. Mckenzie followed shortly afterwards. Incidentally Hasslefree is a wonderfully friendly and efficient family run business and you get sweets too!
Posted by dwartist at 13:39 No comments:

I've been posting photos of my painted 25/28mm miniatures on several different, dedicated forums for a little while now and have been delighted with the reception they have received - thankyou. I thought it might be an idea to 'bring them together' for those interested enough to view occasionally.
Posts will be mostly images of miniatures that have caught my attention and I have, consequently, purchased and painted and of the very few commissions I have agreed to undertake. I don't actively seek commissions but will, on occasion, paint for 'friends' I've made from regularly visiting the aforementioned forums.
I'd also like to include images of work by painters that have inspired me personally (if they'll permit me, of course) and links to their blogs and websites.
First up Hasslefree's (and friend) sci-fi (not)'colonial marines'and 'friend'
Posted by dwartist at 11:19 No comments: