...as promised pics of several miniatures from Anvil Industry's Afterlife: Shards of Liberty Kickstarter. It must be stated right away that these miniatures are prototypes and not the final product so, yes, there may be a few flaws (actually Joel I didn't find anything major that couldn't be sorted very quickly) and you may be able to spot a few print lines but I'm confidant that when the miniatures are released to the backers they'll be nigh on perfect.
I'm going to start with the war-droids as these are absolute stunners. Built largely on the chassis of the Unity Council 'Ajax' exo-mech the miniatures arrived with separate 'arm's and 'head' so the possibility of further weapon options and a duifferent sensor array is possible in the future.

Next is Special Operative Ellenor Renard the Kickstarter exlusive miniature

...and finally for this post Lena Petrova Electronic specialist (not great photos these - in the front view you can't see the very detailed implants 'cap' she is wearing)

I have a two more female civilians to show you but haven't had time to put them together yet. Hopefully tomorrow... meantime pop over to the KS and pledge! 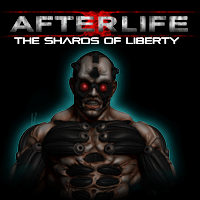