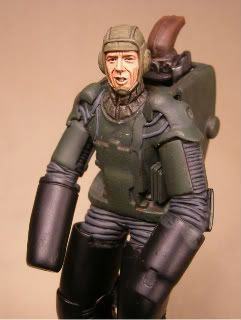 I don't paint anything bigger than 30mm - usually...but the armoured-suit models of the Machinen Krieger universe (formally SF3D) have always had an appeal for me. Designed originally in 1/20 scale by Japanese master modeller, Kow Yokoyama, and released by Nitto as multi-media kits they became very difficult to find post 1980's. Recently there has been a revivel of the franchise, overseen by Kow himself and driven by a very large fan base - non more so than the excellent group of modellers and painters who frequent the forum at machinenkrueger.com.
I have most of the new kits produced by Wave in the last couple of years, and by Hasegawa this year but the first one I've started to paint is a 'one-off' from the cottage industry surrounding MA.K, a Heavy Use Worker Suit. Wonderfully designed and cast (? )by Jason Eaton this might best be described as a MA.K version of the Power Loader in Aliens. I've changed the original head (nothing wrong with it but it was wearing sunglasses and I envision placing the HUWS in a winter scene with the Falke and the new, Cold District Maintenance Soldiers figure set), added depth to the 'boots' and attemted to add cast texture to some of the suit.
A larger, close-up is here.
Posted by dwartist at 10:21